This tape contains two episodes of the series of news reports on the Indians of All Tribes occupation of Alcatraz Island in San Francisco. Episode BB5457.03, recorded and broadcast 1969-12-31, begins with the KPFA announcer explaining that they were waiting for the connection to be made with Alcatraz Island, and soon John Trudell reports in from the island, saying that they were having problems with their generator. Trudell then interviews Bernel Blindman, a student majoring in social welfare at Berkeley, originally from Pine Ridge reservation in South Dakota. They discuss the low quality of life and lack of work on the Pine Ridge reservation, the death penalty, and news regarding Thomas Whitehawk who was sentenced to the electric chair in South Dakota. Duration 00:14:02.
Episode BB5457.04, recorded and broadcast 1970-01-05, included a news report from the island, followed by an interview with Douglas Remington and Linda Aranaydo regarding their work with the school on the island, which was seeking accreditation as a private school. Douglas is a southern Ute from Denver, age 24 at the time of the interview, with a BA in English Literature and an MA in Theatre Arts. Linda is a Creek from Oakland, California, was 21 at the time, and a senior in social sciences at the University of California at Berkeley. Duration 00:14:16. 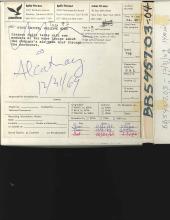