A free-form tapestry woven from music, poetry, myths, literature, and drama by and about women. Pieces in Part 1 include: "An ancient gesture" by Edna St. Vincent Milay; "Bell pieces" from Grapefruit by Yoko Ono; "Pain for a daughter" by Anne Sexton; "Man woman sketch" by Naomi Pollack; "Stillbirth" from the Diary of Anais Nin, adapted by Naomi Pollack; "Daddy" by Sylvia Plath. Songs were "That ain't even my name" by Maxine Sellars; "Nothing hurts so much as pain" by Naomi Pollack. Performers were Judith Chaikin, Corey Fisher, Naomi Pollack, Maxine Sellars, and Peggy Smith. Pieces in Part 2 include: "Bell pieces" from Grapefruit by Yoko Ono; "Consorting with angels", "Man and wife", "December 11th" by Anne Sexton; "Nightmare" by Isabella Gardner; "Which wife" and "You'll be sorry for that word" by Edna St. Vincent Malay; "Man woman sketches," "Retreat," and the song "Kay" by Naomi Pollack. Songs were "That ain't even my name," "I feel bad," "A bad case of the uglies," "Two hoots and a holler," and "Live acts" by Maxine Sellars. Promo material over "A bad case of the uglies" actual advertising copy found in Glamour magazine. Performers were Corey Fisher, Naomi Pollack, Peggy Smith, Maxine Sellars, and Judith Chaikin. Produced and directed by Judy Chaikin and Naomi Pollack. 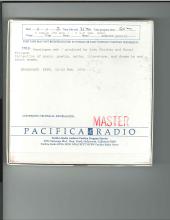 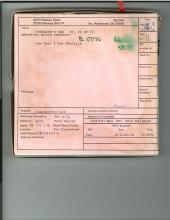