Of God, land, and nation : Native American land claims and the Bill of Rights (Episode 3 of 15)

KPFA Folio, April 1982 notes: Native American nations, those that existed on the land mass governed by the United States of America, were here long before that government was formed. And these nations still exist. From the early 19th century to the present, the United States Supreme Court has refused to hear Native American Indian cases insisting that their land was taken in violation of the Fifth Amendment (deprivation of property without due process of law). There is also a First Amendment consideration since the Indians believe their homeland to be sacred. This program explores the basis of the constitutional grievances based on the Fifth Amendment, sketches the history of these claims, and focuses on the situation of the Miccosukee in Southern Florida. 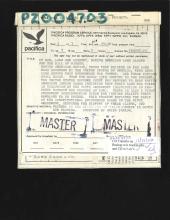