Television on trial: cameras in the courts (Episode 13 of 15)

The thirteenth in the series Bill of Rights Radio Education Project, co-sponsored by the Pacifica Foundation and the American Civil Liberties Union, with major funding from the National Endowment for the Humanities. This episode focuses on conflict between freedom of the press and the defendant's right to a fair trial. Produced by Richard Mahler. Adi Gevins, executive producer; Kathy McAnally, narrator; Ginna Allison, associate producer; David Rapkin, project engineer.

Folio note: "In 1981, the United States Supreme Court abandoned an old taboo and decided for the first time that the news media could photography and broadcast trials. Since then, the states have been experimenting with cameras in the courtroom. It is a difficult dilemma, pitting two fundamental constitutional rights against each other. Which is most important: the public’s right to know, protected by First Amendment freedom of speech and press rights, or is the defendant’s right to a fair, speedy and public trail guaranteed by the Sixth Amendment? Richard Mahler explores the effect of television broadcast on court procedure, on the quality of justice, and on the viewers." 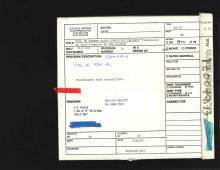