And throw away the key: the Eighth Amendment and cruel and unusual punishment (Episode 9 of 13)

This is the 9th in the series of 13 episodes. This program examines the recent realization of the deplorable conditions in most prisons and suggests new alternatives - house arrest, reduced sentences, and the private ownership of prisons. This program also includes interviews with "jailhouse lawyers" and contains actuality from the Attica riots. Sponsored by the Pacifica Foundation and the American Civil Liberties Union Foundation, with funding from the Deer Creek Foundation, St. Louis, Missouri; and the California Council for the Humanities. Bicentennial Edition researched, edited, and produced by Adi Gevins, 1987; engineered by David Rapkin; announcer is Brenda Wilson; original program produced by Kathy McAnally with Ellin O'Leary, 1982.

KPFA Folio notes: The rights of incarcerated prisoners are, by definition of their condition, limited. Yet they are protected, specifically the Eighth Amendment's prohibition against cruel and unusual punishment. But what constitutes "cruel and unusual"? Since this program was originally produced, most states are under court orders to improve prison conditions, and crime has become even more of a political issue. The number of prisoners across the nation are at all time highs. Justice Department statistics estimate that the federal prison system is far above capacity. Alternatives such a house arrest, reduced sentences, and private ownership of prisons are being examined by the penal system, but are controversial. This program traces the history of prisons in the United States and includes interviews with prisoners who act as "jailhouse lawyers" and others as well as actuality from the Attica riots. Participants and consultants include Al Bronstein, ACLU Prison Project; Philip Johnson, Professor of Law, UC Berkeley Law School; attorney William Turner; author Jessica Mitford; Columbia History Professor David Rothman; and Tom Wicker of the New York Times. 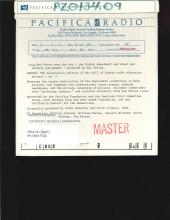