Disarmament Now! Episode 1 of 4. Linus Pauling (February 28, 1901 – August 19, 1994) and Professor Henry Way Kendall (December 9, 1926 – February 15, 1999). Professor Kendall, MIT, describes the results of nuclear warfare, how the USSR is vulnerable to nuclear attack, how it would affect the ozone shield and therefore us. His opinion: nuclear warfare would be a genetic and ecological disaster, like the Black Death in the 13th Century. Also heard on this recording is Bernard Feld (December 21, 1919 - February 24, 1993), editor of the Bulletin of the Atomic Scientists. Portions of this recording were taped during a special session on disarmament at the annual meeting of the American Association for Advancement of Science, which occurred in San Francisco in January 1980. Note on label: Starts low -- it's supposed to so don't freak out. Ends without credits and long music bit. 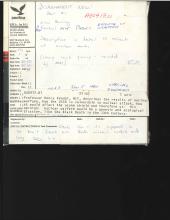