Woman Poet West: the first part of a two-part program featuring excerpts of a reading done in honor of the publication of the Woman Poet anthology West Coast edition (Women-in-Literature, Incorporated, 1980). The reading was recorded in September 1980 at Cody's Books in Berkeley. The poets heard in the first part of the program are Elaine Dallman, editor of the Anthology, and a teacher at the University of Nevada at Reno; Kathleen Fraser, author of New Shoes (1978) and What I Want (1973), and professor at San Francisco State University; Sandra Gilbert, author of In The Fourth World (1979) and editor of two books of literary criticism Shakespeare's Sisters: Feminist Essays On Women Poets (1979) and The Madwoman In The Attic: A Study Of Women And The Literary Imagination In The Nineteenth Century (1979); and Susan Griffin, author of Like The Iris Of An Eye (1976), the play Voices (1975), and two books of prose, Woman In Nature (1978) and The Power of Consciousness (1979). 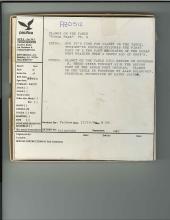