Women's news and commentary for KPFA, September 11, 1975. Segments: 1. The radical feminist group Redstockings' charges that feminist activist Gloria Steinem was once involved with the CIA. Kathie Sarachild of Redstockings is interviewed about those charges and discusses Steinem's ascendancy to her platform and MS Magazine's ignoring of radical feminist causes and possible complicity with the CIA; 2. The FBI tracking the women's movement, with special focus on Jane Alpert, who cooperated with a grand jury investigation; Shoshona, aka Patricia Swinton, who was fingered by Alpert, discusses Alpert's politics; 3. Shoshona talks about Assata Shakur; 4. A report of the first National Conference of Socialist Feminists, held in Yellow Springs, Ohio in July 1975, whose goal was to define feminism in revolutionary terms; 5. A report on Wilma Schneider, first woman prison guard at San Quentin, who recently announced her retirement; 6. Reading of a passage from Jo Freeman's book The Women's Liberation Movement. Produced by the Women's News Collective of KPFA, including Susan Elisabeth, Peggy Hughes, Joan Medlin and Janet Potter. 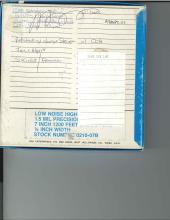