Reading of letters written by a woman homesteader, Elinore Pruitt Stewart (1876-1933) in Wyoming around 1910. Part 3 of 3. These three episodes of Stewart's letters were part of a continuing series on KPFA based on women’s diaries and letters.
Part three: This portion begins in December 1913. Stewart describes Christmas with her neighbors; how they helped two Mormon women and their children who were all in need; and other adventures Stewart has with her friend and neighbor, Mrs. O'Shaughnessy. The materials used in this program come from "Letters of a woman homesteader" by Elinore Pruitt Stewart, published by the Houghton Mifflin Company, Boston. Elinore Stewart's letters were copyrighted by herself and by Atlantic Monthly in 1913. The letters are read by Luce Morgan; produced and narrated by Brett Vuolo; the music is provided by Larry Packer; technical production by Peter Zanger. 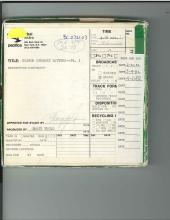