This is a recording made at an outdoor rally somewhere in the Bay Area in 1972, featuring speeches by Reverend Cecil Williams and Angela Davis, after her release from prison in June 1972. The recording starts with a woman speaking over a P.A. system, announcing that they have collected 1500 signatures for their petition and want to keep collecting signatures to turn in to the Attorney General's office. She then introduces Reverend Cecil Williams, who talks about genocide against Blacks happening in and by the United States, including medical testing on Blacks happening in Alabama, Blacks and poor whites fighting in Vietnam and the toll it takes on their lives when they return to the United States, discrimination against poor people in prison, population control, the ruling against Ruchell Magee, and the San Quentin Six. (about 8 minutes) Angela Davis speaks second, on freeing Ruchell Magee and the San Quentin Six. Then reporters interview Angela Davis about her life after being released from prison, the fight to free political prisoners, and women's prisons in California. Contains two pre-recorded jazz songs. 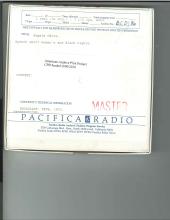