Laurie Alexandre introduces Dorothy Healey (1914 - 2006), former chair of the Southern California chapter of the Communist Party, interviewing her mother, Barbara Nestor, on her activities as an anti-war and anti-capitalist activist. Nestor joined the Socialist party in 1915 and then later helped establish the Colorado chapter of the Communist Party. The end of the recording features a previously taped segment of Nestor singing union songs. Originally recorded in 1974. This recording is played in its entirety in KZ1152, a memorial tribute by Healey to Nestor after her passing away in 1979 at age 95. 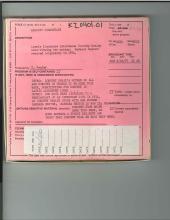