These twelve reels are live raw recordings taken at the West Coast Women's festival in 1980, held in Yosemite CA September 26-28th, 1980. The festival was produced by Robin Tyler and co-produced by Torie Osborn, and two to three thousand women attended. These recordings were a joint project of Pacfica radio stations KPFA and KPFK. This concert was recorded by Linda Mack with Susan Kerniss and Susan Elizabeth. An edited version of the festival can be found here: KZ1038

Part A begins with a "speakout" on the shortage of child care at the festival and that one of the acts (Alix Dobkin?) had asked that all boy children be removed from the audience during her performances. Next, Casselberry and Dupree perform the following: "Chants to Elegba", "That Is My Dream", "In the Morning", "A Case of You."

Part B: Casselberry and Dupree continued with "Take it to the Limit", "Corrine", and an African song. Announcements by festival producer Robin Tyler. Next is singer Dovida Ishatova. She performs a Chopin piece.

Part C: Dovida Ishatova continues with "Amazon", reads an excerpt from a piece she wrote with her mom about being released from a Nazi Concentration Camp by Russian women soldiers "Henya[sp?]" (poem), and an instrumental. Ambient noise and then announcements by festival producer Robin Tyler.

Part I: Gwen Avery continues "I'm On My Way", and an encore "Sad Song". Robin Tyler? asks the audience "Do you want to have a disco?" Audience answers "yes". End of Saturday night concert.

Part K: Izquierda Ensemble: rap about growing up female and song about heterosexuality (duplicate), "Power to our intuition,"[?], "Looking To Be Free". Announcements, then Charlotte Bunch comes up on stage and says "No Robin, flirting is not sexist." Andrea Floyd performs. Previously labeled KZ0454J 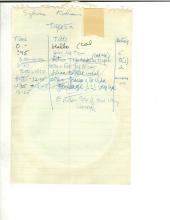