Helene Rosenbluth and Eloise Klein Healy visited the People's Republic of China in April 1982. This program is produced from interviews they did with women in Shanghai, Nanjing, Xi'an and Beijing (Peking) about the changing lives of women in modern China. The interviews are bilingual and translated through an interpreter. The first reel of this recording features an interview with one of the leaders of the Nanjing Municipal Women's Federation. The second reel of this recording features on-the-street interviews with a variety of Chinese women - including Pei-Chin Liu(sp?), the translator who accompanied Rosenbluth and Healy - about the status of women in China. Original music from the People's Republic of China. Produced by Helene Rosenbluth and Eloise Klein Healy. Originally aired as an episode of Feminist Magazine as part of programming in a day-long recognition of China's May 4th Movement. The program was later rebroadcast on May 14, 1984 as an episode of Poetic License. 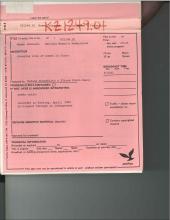