TO MAKE A DONATION TO THIS PROJECT CLICK HERE

These comments were made by a young woman from Cal State LA, after hearing the voices of Anais Nin, Dr. Margaret Mead and other radical women for the first time at our first public presentation for American Women Making History and Culture, 1963-1982 a project of the Pacifica Radio Archives. Her reaction - to be inspired, educated, motivated - is our payoff.

HEAR these extraordinary recordings: Congresswoman Bella Abzug describes being a woman in politics during the "Decade of the Woman" (1981). First Lady Eleanor Roosevelt recounts how the United Nations was created (1961). Suffragist Isola Dodic remembers marching around the White House in 1913 to win women the vote (1978). Actress and activist Ruby Dee speaks about fighting apartheid in South Africa (1964). Poet Audre Lorde recites "To Be Young, Black and Lesbian" (1982) and early (1970's) "consciousness raising" sessions, broadcasting all the personal and noisy revolutionary fervor for the world to hear.

The impact of the movement was profound, and it's amazing that so much was captured on tape.

THANK YOU for your generous support,

The Pacifica Radio Archives is proud to announce it has been awarded a grant from the National Historical Publications and Records Commission at the National Archives and Records Administration to save 1644 recordings described as American Women Making History and Culture: 1963-1982.

From the Press Release: "The American Women two year project will document the emergence and evolution of the Women's movement in cities across the United States, and the unique role listener sponsored non-commercial Pacifica Radio played by providing a communications hub to create and broadcast programs expressing their struggles, philosophies, and victories."  Read the rest here or download the press release here.

Our grant category, Documenting Democracy: Access to Historical Records promotes the preservation and use of the nation's most valuable archival resources and expands our understanding of the American past by facilitating and enhancing access to primary source materials.

Please visit and subscribe to our blog for updates on the project at: http://womenmakinghistoryblog.wordpress.com/!!! 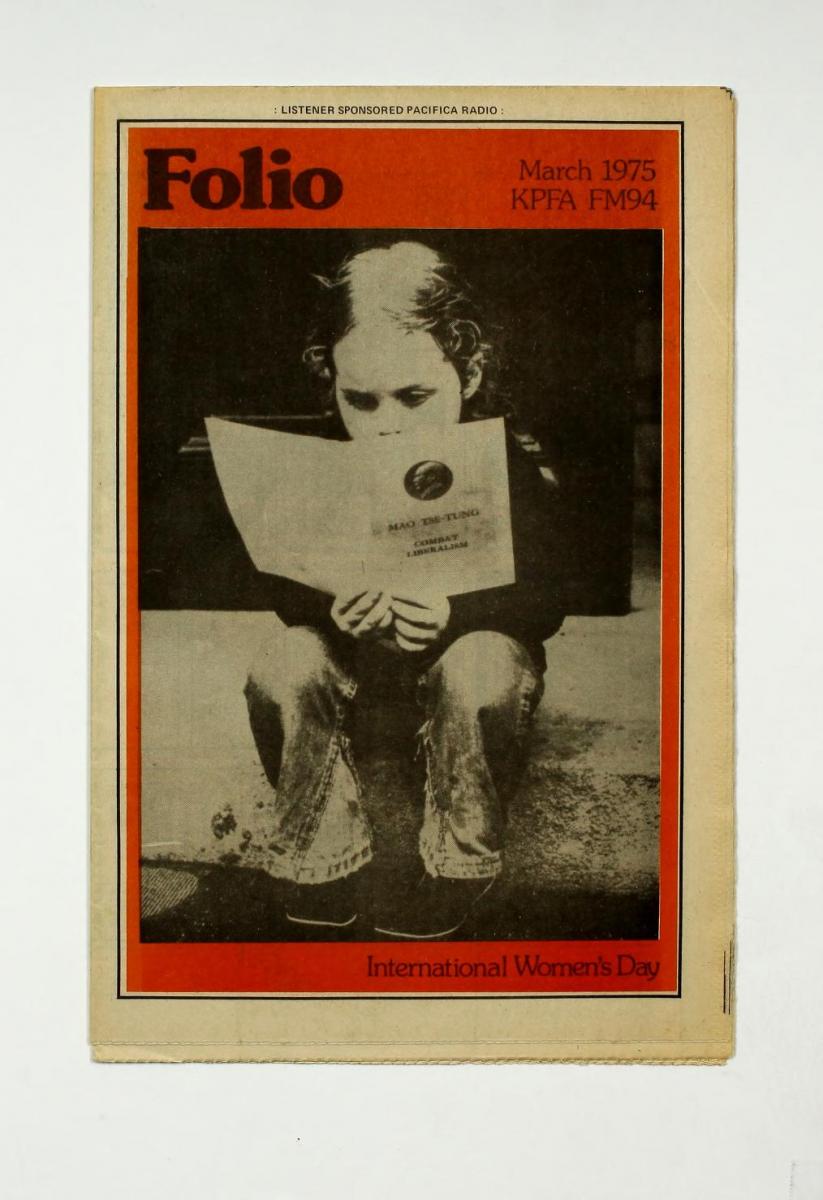 The American Women Making History and Culture, 1963-1982 ("American Women")  collection includes Pacifica Radio Archives' holdings from the five Pacifica radio stations (KPFA- Berkeley, CA; KPFK- Los Angeles, CA; WBAI- New York, NY; WPFW- Washington, DC; and KPFT- Houston, TX) pertaining to the Women's movement, or the period popularly known as "Second Wave Feminism" in the United States; from the publication of The Feminine Mystique (Betty Friedan, 1963) through the failure of the Equal Rights Amendment in 1982. The American Women collection will document the emergence and evolution of the Women's movement in cities across the United States over the included timespan, as well as the unique role Pacifica Radio played by providing a place for women to create and air programming that communicated the movement.

This two-year project (October 2013-September 2015) includes the digitization of nearly 1,700 reel-to-reel tapes, and the updating of legacy catalog records through two levels of cataloging--edited item-level descriptions with standardized metadata, and a searchable online finding aid available at the Online Archive of California. The digital objects and records will be preserved long-term at the California Digital Library via the UC Berkeley Library.  Public access to streaming audio will be provided by the Internet Archive. Dedicated web pages on the PRA website will describe the collection and provide links to the streaming audio at the Internet Archive.  In the end, we will have a tested methodology for undergoing future preservation and access projects at Pacifica, and most important, we will produce an incomparable collection of primary sources for the study of the American Women's movement.

Click here to listen to an excerpt fromJane Fonda and the airmen at the gates of Travis Air Force Base, reported by Denny Smithson.

Fifty-one of the American Women recordings have been made available streaming through the UC Berkeley Library online catalog: OSKICAT.  Click here to browse through and listen to this selection. (These recordings take 30-60 seconds to load on Real Player, so please be patient)

A complete list of recordings included in the American Women project will be appearing below under Recordings available as part of this project. Click on any of the links for more information about specific recordings.  Also, links to streaming audio (provided by the UC Berkeley Library) will be made available in each record as they are digitized.

Recordings available as part of this project:
Kay Lindsey discusses the group, New York Radical Feminists, with members of its Stanton/Anthony Brigade, Martha Gershun, Anne Koedt, and Diane Crothers. The group is composed of "brigades" and "phalanxes." The Stanton/Anthony Brigade, named for Susan B.
Four Black women--Peachie Brooks, housewife and mother of five living in Brownsville, NY; Vertamae Smart-Grosvenor, mother, actress, and Temple University and Sorbonne alum who has lived in New York and Paris; Florynce "Flo" Kennedy, attorney, director of Media Workshop and member of the Steering Committee of the Peace and Freedom Party; and Eleanor (Holmes) Norton, Antioch University
Writer and diarist Anais Nin answers questions from audience members at UC Berkeley, touching on topics such as art, liberation, her diaries and other writings, acceptance from the establishment, and feminism. Includes musical performance by Richard Stoltzman of a solo clarinet movement from Messiaen's Quartet for the End of Time.
This is the second of thirteen episodes in this series. This program traces the legislative history of abortion regulation, featuring both pro and anti-abortion activists. This Program also examines the Supreme Court Roe vs. Wade case. Sponsored by the Pacifica Foundation and the American Civil Liberties Union Foundation with funding from the Deer Creek Foundation, St.
Folio description: Birth and death: the seemingly clear points that mark the beginning and end of our lives. But these are not times of clarity, especially in matters of life and death. The issue of abortion has touched national nerves that go beyond an individual’s decision whether or not to terminate a pregnancy.
Dolores Huerta, Vice President of the National Farm Workers AFL-CIO and Grape Boycott Coordinator, along with and activists Antonia Soledad, Venustiano Olguin, and Mark Silverman discuss the Grape Boycott. Interviewed by Nanette Rainone.
Dramatization of Anne Hutchison's trial for non-orthodox religious activities in colonial Massachusetts. Episode two of the 14-episode series produced and broadcast on KPFA by Virginia Maynard and Charles Levy from 1958 to 1959. The series was written and directed by Virginia Maynard and produced by Maynard and Chuck Levy, narrated by Levy, and engineered by David Talcott and James Cano.
Alice Toklas reading from The Autobiography of Alice B. Toklas by Gertrude Stein and The Alice B. Toklas Cookbook. From the folio "It isn't really an autobiography, of course, because it was written by Gertrude Stein, which is known as too many ironies in the fire.
A radio production examining contemporary concerns for lesbians, how lesbians view themselves, and the hostile and often impertinent world they face. Contains music, poetry, panel discussions, dramatizations and dramatic readings written, read and performed by lesbians. Conceived by the Women's Center for Theater and Media.
Short interview with African-American Congresswoman Shirley Chisholm (b. November 30, 1924 – d. January 1, 2005) in between her last campaign appearances before the New York state primary in 1972. Congresswoman Chisholm was the first African-American woman to run for the position of President of the United States.
On women's view of their role in Colonial life. Contains dramatic readings of Benjamin Franklin's "The Speech of Polly Baker," excerpts from the letters of Abigail Adams, and Charles Brockden Brown's "Alcuin: a Dialogue." Episode three of the 14-episode series produced and broadcast on KPFA by Virginia Maynard and Charles Levy from 1958 to 1959.
This episode is on the long-standing view of woman's responsibility for man's sins. Contains a dramatization of Nathaniel Hawthorne's "The Scarlet Letter." Part one of the 14-part series produced and broadcast on KPFA by Virginia Maynard and Charles Levy from 1958 to 1959.