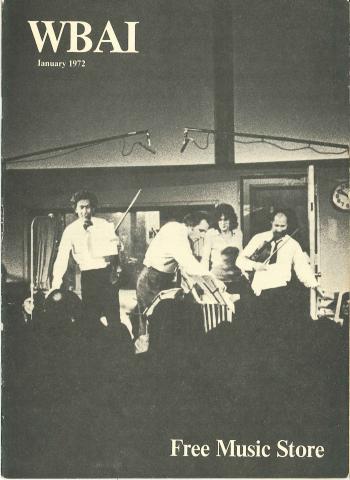 I'm Joseph Gallucci, archivist and cataloger for the Pacifica Radio Archives. I'll be writing a series of posts on our blog over the next few weeks showcasing some highlights from two series of tapes that were recently preserved thanks to a grant from the GRAMMY Foundation: The Free Music Store and The Mind's Eye Theatre, previously known as 99.5 Radio Theatre. All of these programs, which aired on Pacifica station WBAI-FM in New York City, showcase Pacifica's role as a beacon for experimental radio programming in the 1960's and 1970's.

First I'll be discussing some personal favorites and highlights from the Free Music Store, a weekly live performance held at WBAI's studios from 1969-1976. The brainchild of WBAI Music Department head Eric Salzman, The Free Music Store concerts were once located in a deconsecrated church on East 62nd Street. In the spirit of the then-recently inaugurated Shakespeare in the Park, all performances were free and open to the public (space permitting). The audience sat on the floor, refreshments were served at the door, and smoking was expressly prohibited at every performance, unless you were a musician. WBAI staffers asked patrons for donations on their way out of the door, from which a percentage was split amongst the performers; the remainder went to WBAI's operating costs.

The Free Music Store brought in a diverse series of musicians and performers from all over the world. Folk-rock legends Seals & Crofts, Hungarian cello maestro Janos Starker, Brazilian percussionist Nana Vasconcelos, and many classical music ensembles, from the contemporary leanings of the Aeolian Chamber Players to Baroque specialists such as the Philidor Trio, are just a handful of the musicians represented in this series of recordings. The FMS hosted an annual Ragtime Revival concert, helping to usher in the ragtime craze years before The Sting won its Best Picture Oscar. A tribute concert to Igor Stravinsky was organized three months after the Russian composer's passing in December 1971. A March 1972 concert devoted to bluegrass and country fiddling, featuring the legendary Tex Hogan, almost literally brought the house down, thanks to the fervent clapping and foot-stomping of the audience.

Many of these concerts were recorded on then-state-of-the-art four-track recording technology by award-winning Pacifica engineers such as David Rapkin and Steve Rathe, making optimal use of the church's excellent acoustical setup. Listening today, the sheer ambition and quality of the Free Music Store performances are no less impressive in 2013 than they were over forty years ago. Pacifica Radio Archives is proud to present these rare recordings, all recorded in glorious stereo on Pacifica airwaves.

If you love the Free Music Store, you can own all of the recordings Joseph preserved in our fund drive premium, The Archivists' Circle!
http://pacificaradioarchives.org/recording/pz0919