How do the jobs we do affect our unborn generations? What are genetic toxins? How can we protect our children? Why is this not just a women's issue? How can this issue be used to discriminate against women in the workplace? This program explores all of these topics, plus the American Cyanamid Plant in Willow Island, West Virginia, and the company policy which banned fertile women from working with lead, which led to five women having themselves sterilized in order to keep their jobs.

Voices heard on this program are workers at Occidental Chemical Company; Don Horton, a doctor who studied men at Occidental Chemical who had become sterile due to working with DBCP, an insecticide; Andrea Hricko, an OSHA consultant and producer of a film about working women; Anthony Robbins, director of the National Institute for Occupational Safety and Health (NIOSH); Tony Mazzocchi, director of Health and Safety for the Oil, Chemical, and Atomic Workers Union; Dr. Molly Coye, a medical investigative officer for NIOSH; Dick Cavalli, toxicologist for Standard Oil of California; Stan Dryden, manager of industrial hygiene services for Standard Oil of California; Steve Swanson, health and safety coordinator for the American Petroleum Institute; Karen Mew, a lab worker at the Lawrence Livermore Laboratories, a nuclear weapons and energy research facility operated by the University of California; Carol Oppenheimer, attorney at the Center For Law and Social Policy in Washington, D. C.

Produced by Public Media Center under a grant from the U. S. Department of Labor, Occupational Safety and Health Administration. Produced by Michael Singsen and Peggy Stein. Announcer is Chris Welch. 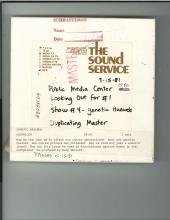