Karla Tonella interviews feminist theorist and writer Charlotte Bunch, editor of Quest Magazine, a feminist quarterly. Bunch reviews the history of the Women's Liberation movement beginning around 1968 (the birthing year); 1969-1970 (the growing years); 1970s (feminist organization). The chronology of the women's movement presented by Bunch moves from "we exist, we are oppressed" to "why we are oppressed?" to "what are we going to do about it?" Bunch reviews the present state of the Women's Liberation movement and how it must stay in touch with the needs of society at large or else it will die out like other political movements have. Self-contained.

Previously cataloged as AZ1131. PRA has two copies of this program, one self-contained with musical interludes and identification of the participants (this version was broadcast on KPFA), and one that only contains the interview. The latter contains a segment that is not in the broadcast, self-contained version. 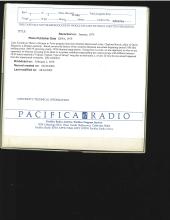 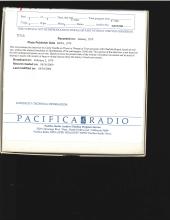