As the battle for People's Park continued, the California National Guard was called to Berkeley. Its equipment included helicopters which patrolled the city and on May 20, 1969, one of the helicopters was used to drop tear gas over Sproul Plaza on the Berkeley campus. A rather large plaza was in the crowd when the gas was dropped and the exits to the plaza were blocked by National Guardsmen carrying rifles with fixed bayonets. The gas spread from the plaza into offices and classrooms on the campus, into the campus hospital, into a residential area near campus, and as far as the Strawberry Canyon Recreational Area about a mile up the hill where some pre-school children who were swimming there were affected by the gas. In addition to the reports of the gassing heard over KPFA at the time, this program also includes several explanations by medical people of what the gas was and what its uses and affects are. Featured speakers include Drs. Chuck McAllister and Thomas Bodenheimer of the Medical Committee for Human Rights; Berkeley Vice-Mayor Wilmont Sweeney; Peter Scott, associate professor of English at UC Berkeley; and Margaret Plouse, a history teacher at Willard Junior High School. This program was aired a year after the incident, as part of a series of programs on Pacifica Radio's KPFA-FM examining what happened that day. The program is narrated by Charles Schug for Pacifica Radio. 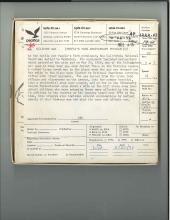