Neutral against God : school prayer and the First Amendment (Episode 4 of 15)

On box: Neutral Against God: Does the First Amendment Prohibit Prayer in Public Schools? In 1962, in Engle v. Vitale, the U.S. Supreme Court ruled that the First Amendment requires that "a wall of separation" be built between church and state. Public schools were prohibited from requiring students to pray. Immediately clergy and parents objected stating that their rights were being violated since their beliefs included their children praying in school. Therefore this prohibited their free exercise of religion. In 1980 there was a resolution supporting voluntary prayer in public schools in the Republican Party platform. In 1982, however, the Supreme Court decided that voluntary prayer is also in violation of the First Amendment. This program explores that conflict.

Recording has echo for the first few minutes of the program. 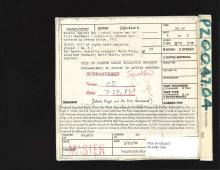