And throw away the key : the Eighth Amendment and cruel and unusual punishment (Episode 5 of 15)

KPFA Folio, May 1982 notes: The Eighth Amendment to the U.S. Constitution prohibits cruel and unusual punishment, but what is cruel and unusual? This program explores that definition which has changed substantially since the 16th century. Currently, many state prisons are under court orders to improve conditions found to be unconstitutionally cruel by judges who heard cases from the prisoners about the conditions. The states, under orders, have for the most part been financially unable to make the ordered corrections. And, as public feeling against prisoners grows hotter, more and more prisoners are being brought into the system and less and less is being done about them once they are there. Some corrections professionals believe the prisons will inevitably erupt, and hope that the ensuing violence will at last alert the public and politicians to the necessity of corrective measures. 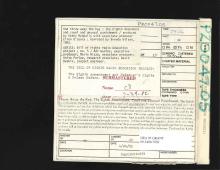