Public libraries and the First Amendment (Episode 6 of 15)

The sixth in the 15-part series Bill of Rights Radio Education Project, co-sponsored by the Pacifica Foundation and the American Civil Liberties Union, with major funding from the National Endowment for the Humanities. On censorship and book banning in libraries; includes the case against Kathy Russell, director of the Washington County Public Library in Abingdon, Virginia. Principal production by Marie Ritzo ; initial production by Geri Calkins ; additional production by David Selvin ; narrated by Brenda Wilson.

On box: The Public Library in America: An Experiment in Democratic Control. The Intellectual Freedom Committee of the American Library Association receives three to five reports a day from librarians around the country who have received requests from patrons to remove specific books from the shelves of local public libraries. Some are bestsellers, others are classics. Groups advocating removal say their tax dollars should not be used to buy objectionable materials. Others contend that this impinges upon their right to read these books and therefore their freedom of speech and the press. This program examines the conflict as well as its implications for public libraries in America. Produced by Geri Calkins, Marie Ritzo, and David Selvin. 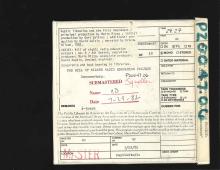