He went and preached unto the spirits in prison : freedom of religion in American penal institutions (Episode 9 of 15)

On box: Freedom of Religion in Prison. The Bill of Rights protects all citizens against government abuse of power in the matter of freedom of religion, of the press, of speech, and to a speedy and public trial. But what happens to these rights once a citizen is incarcerated in a state or federal prison? During the 1960s, Black Muslims were put in solitary confinement when found with clippings of their newspaper Mohammed Speaks, were forbidden to leave their jobs to pray, or were served pork meals. They maintained they were being discriminated against because of their religion and won many suits permitting them to practice their religion, including visits from their holy men, possession of religious materials, and serving of pork free meals. Are these rights being endangered now as the attitudes towards prisoners’ rights change? Produced by Amina Hassan. 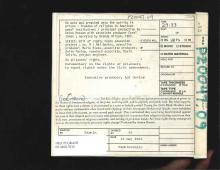