This is the fourth in a series of 13 episodes. This episode is a documentary on gun control, composed of interviews with lobbyists and people on the street as well as recorded news coverage. This program examines communities with tough gun control laws to highlight the complexities of this emotional issue. Sponsored by the Pacifica Foundation and the American Civil Liberties Union Foundation, with funding from the Deer Creek Foundation, St. Louis, Missouri; and the California Council for the Humanities, a state program of the National Endowment for the Humanities. Bicentennial Edition researched, edited, and produced by Adi Gevins, 1987; engineered by David Rapkin; announcer Brenda Wilson; original program produced by David Selvin, 1982.

Folio notes: Tens of thousands of people are killed every year in the United States by guns. Hundreds of thousands are wounded. Are these deaths and injuries the price society must pay to preserve the constitutional right to bear arms? Existing federal gun controls were revised in 1986, and both sides claim some victory. Are gun control laws constitutional, or are they in violation of the second amendment? Interviews with lobbyists and people on the street and recored news coverage, and illustrations of communities with tough gun control laws, examining the complexities of this current emotional debate. With Pete Shields, Handgun Control Inc.; David I. Caplan, attorney; Don Kates, attorney; Richard Gardiner, National Rifle Association. 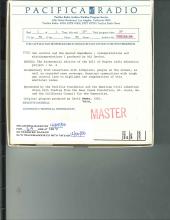