National march on Washington for lesbian and gay rights (ACTUALITIES)

On October 14, 1979, ten years after the Stonewall riots, more than 100,000 people from the United States and ten other countries marched on Washington, D.C. for lesbian and gay rights. Pacifica producers in Washington recorded speeches and actualities from the rally, and parts were broadcast live. This second set in the series consists of four reels of actualities from the rally after the Pacifica broadcast was done airing. These reels were previously cataloged as KZ0754.03, KZ0754.04, KZ0754.05, and KZ0754.06.

KZ0754.02A starts with Holly Near, JT Thomas and Meg Christian performing "There's something about the women" (begins midway through the song) and a rendition of "We are a gentle angry people." A female announcer (not named) speaks about money and solicits donations from the audience. Holly Near then performs "Over the rainbow." Ray Hill from Houston, TX talks about incarceration of gay men and lesbians and introduces the Reverend Dr. Charles Law. Law speaks on how "integration, and not assimilation" is the main challenge for gay activism in the 1980s. Hill then introduces Paula Gunn Allen from the American Indian Gay Movement, who speaks on how she represents the people with the longest gay history in the Western hemisphere. Allen Ginsberg reads his poem "Song" and sends a warning to Congress, and Peter Orlovsky reads "Someone liked me when I was twelve." KZ0754.02B begins with Ray Hill introducing Juanita Ramos and Armando Gaetan, representing Third World gays and lesbians (Ramos speaks in English and then Gaetan summarizes the speech in Spanish). Congressional Representatives Ted Weiss (D-NY) and Phil Burton (D-CA) speak briefly. Hill makes some brief announcements and then another female announcer introduces the disco band Gotham who perform "(I'm your) AC/DC man." Lucia Valeska from the National Gay and Lesbian Task Force speaks. Audre Lorde speaks about the necessity to address racism, classism and sexism in the LGBT movement. BlackBerri speaks briefly and performs his song "Eat the rich." KZ0754.02C starts with Hill making more announcements, then introduces Tom Robinson who sings "Glad to be gay" and "Stand together." Howard Wallace, who organized the boycott of Coors, speaks on behalf of the gay labor movement. Kate Millett, author of Sexual Politics, speaks about the "threat" of gay love. More announcements, then Florynce "Flo" Kennedy is brought on stage and sings "Nothing could be sweeter than to find out that Anita [Bryant] is a lesbian" with a chorus, and then addresses the crowd. KZ0754.02D begins with Margo Carl from Lambda Legal speaking about violence towards and incarceration of LGBT people. Anthony Sullivan, one of the first same-sex marriage applicants in the US, speaks about LGBT people and immigration law. Reverend John Kuiper, the first gay man to adopt a child in the US, speaks about his case. Sandy Schuster and Madeleine Isaacson, lesbian mothers, speak of their struggles. Supervisor Harry Britt from San Francisco speaks about Harvey Milk. The final speaker of the day is Arthur McCombs of the Gay Atheist League of America, who decries religion as the source of gay oppression. 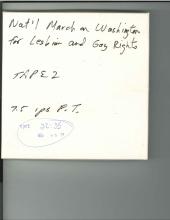 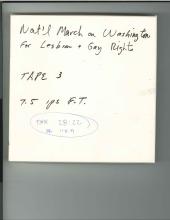 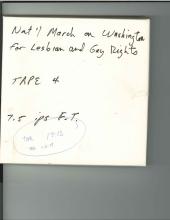